Top 10 Mesmerizing Places to Visit While Travelling in Dooars

The Dooars or Duars are the foothills of the eastern Himalayas in North-East India around Bhutan. Duar means ‘door’ and the region forms the gateway to Bhutan from India. There are 18 passages or gateways through which the Bhutanese people can communicate with the people living in the plains. This region is divided by the Sankosh River into the Eastern and the Western Dooars. The Western Dooars is known as the Bengal Dooars and the Eastern Dooars as the Assam Dooars. Dooars is synonymous with the term Terai used in Nepal and northern India and form the only nitrate rich plain in India.Explore best of Dooars Tourism here.

You can see wild elephants, one-horned rhinos, bison, leopards, several species of deers, snakes, wild boars and many other animals as well as many types of birds including lots of peacocks in these dense forests.

Top 5 Forests to visit in Dooars

Everything You Need To Know About Dooars Tourism, All Information,Handpicked Accommodation in Dooars,Weather, Best Itinerary of Dooars

The Dooars valley (also called Duars) is the floodplains of Northern Bengal and Eastern Assam. The Western Boundary of Dooars is formed by Teesta River, whereas its Eastern boundary within Assam is not very clearly defined. To the North of Dooars is the Kingdom of Bhutan and to its South is Bangladesh. The Bengal part of Dooars, which stretches from River Teesta on the west to River Sankosh on the east, is an area covering roughly 130 km by 40 km. The area forms a major part of the Jalpaiguri, Alipurduar and Cooch Behar district and is one of the most important tourist areas.

Dooars is famous for its rich biodiversity, forests, wildlife and ethnic people and their culture. The most notable forests of the area include Gorumara National Park, Jaldapara National Park and Buxa Tiger Reserve. For years travelers and nature lovers have been exploring the area, though organized tourism set foot in Dooars only towards the end of 20th century. During the last two decades, tourism grew with leaps and bounds in Dooars. The first destination to come into prominence was Gorumara National Park. Soon Jaldapara and Buxa also started to claim their pride place of prominence in the tourism map. Soon tourists started to discover the hidden treasures of Dooars in every other bent of the road.

Planning A Trip To Dooars? Here’s a snapshot of Dooars weather and the best time to visit Dooars
Dooars is an extensive alluvial floodplains located in the northeastern part of the country, forming a gateway to Bhutan. It is a beautiful terrain comprising the floodplains, Himalayan ranges in the backdrop, dense forests and luscious green tea gardens. The weather and climate of Dooars is quite similar to the one experienced in north Bengal, characterized by long winters and heavy monsoon showers. Here’s a guide to show you the best time to visor Dooars.

Summer (March to June)
Summer months do witness an increase in the temperatures and they hover around the 21°C and 31°C mark. But it is not as hot and sultry as it is in the plains. While the summer is not extreme it may however become uncomfortable during the peak afternoons. Hence it is not considered one of the best times to visit the area.

Monsoon (July to September)
Monsoon sets in, in the month of June and continues till September. In June the rainfall remains moderate but as months go by, particularly during the months of August and September, the showers become torrential. Due to heavy rainfall the sanctuaries too remain closed hence it’s not much fun visiting Dooars during these months except for the lush greenery that surrounds the whole area. Nature lovers may find it the best time to explore the fascinating region.

Winter (October to February)
As the temperatures start dipping, Dooars becomes the most favored destination for tourists. As monsoon recedes, it leaves behind an absolutely gorgeously green surrounding that is intoxicating. There are no rains, skies remain crystal clear and weather is perfect for visiting the sanctuaries and enjoying the beauty of nature. A tourism festival called ‘Teesta Tea and Tourism fest’ is celebrated with much fervor in winter. Activities like paragliding, jungle safari and river rafting are also very popular among the adventurous tourists. In December and January, the temperatures can dip as low as 0°C but mostly hover around 10°C and 23°C.

How To Reach Dooars 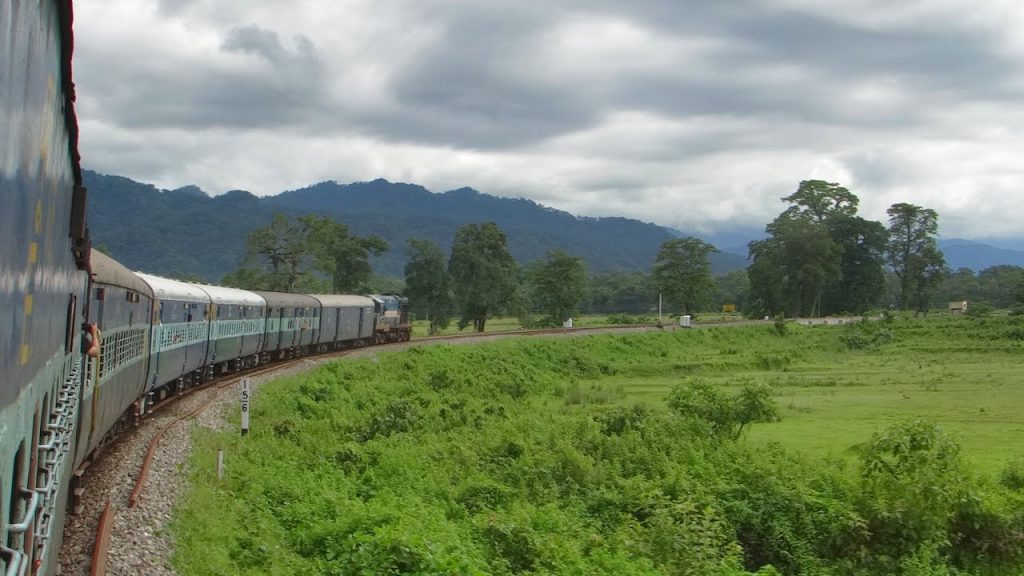 Planning A Trip To Dooars? Here are some guidelines on how to reach Dooars
Located in northeastern part of India in West, south of the outer foothills of the Himalayas are the alluvial floodplains commonly known as the Dooars. The floodplains stretch about 30 km in width and 350 km in length from the Teesta River. Part of the Terai-Duar savanna and grasslands ecoregion, it forms the gateway to the neighboring country of Bhutan. Dense forests and acres of tea gardens dot the landscape and are stunningly beautiful. A favorite tourist destination for many, Dooars is fairly accessible from different parts of the country.

By Air
Dooars which lies in the lap of nature does not have an airport. The closest aerodrome is Bagdogra located about 70 km from Dooars. From the airport tourists can reserve a pre-paid taxi from the pre-paid taxi counter at the airport. The taxis go to both the Gorumara National Park as well as Jaldapara.

By Rail
The nearest major railway junction near Dooars is at New Jalpaiguri (NJP). It is about 60 km from the station and from here tourists can take pre-paid taxis to reach the desired destinations in Jaldapara, Murti, Buxa, Lataguri etc. There is another station near Malbazar, the New Mal Junction which is closest to Dooars but not too many trains come here. Kanchankanya Express from Sealdah is one of the few popular trains that reach New Mal Junction. So for those who are looking to visit Gorumara National Park can get off here. From here they can take taxis or buses to reach their destination.

By Road
Dooars is well connected by roads from all major junctions. So it can be reached from NJP, from Bagdogra by taxi or bus. There are bus services operating between NJP and Coochbehar and travel through different points in Dooars. The bus from NJP leaves around 8:30 am via Siliguri making several stops which allow tourists to get off at their point of preference. From NJP or Bagdogra tourists can reach PC Mittal bus terminus in Siliguri by taxi to board buses leaving or different destinations in that region.

Chapramari is a forest in Dooars area of North Bengal. The forest is a continuation of the Gorumara forests. The two forests are separated by the Murti river which passes through the otherwise continuous forest. Whereas Gorumara is a National Park, Chapramari is only is a wildlife sanctuary. For most tourists the distinction between Chapramari and Gorumara is only theoretical as they may stay in a resort close to Gorumara but visit Chapramari for sightseeing tours or vice versa. As in case of other forests of Dooars, wildlife sighting remains the main attraction for most tourists visiting Chapramari. Dooars Tourism

How to Go- Passing through Dooars by NH31 and to reach Chalsa crossing about 2 hours or 60 kms from NJP. From here till Nagrakata (about 12 kms away) on both side of the road, there is Chapramari forest and after crossing the Murti river can be reached the Jaldhaka river.
Best time to Visit-15th Oct to 15th June

A small picturesque hill village on the Indo- Bhutan border Bindu is a little known tourist destination in lower Kalimpong foothills. The journey to Bindu via Chalsa-Khunia-Jhalong is a fascinating one as the road passes through the beautiful tea gardens, high forests, river valleys and small quiet villages.

Jhalong is a small village situated on the banks of river Jaldhaka, near India-Bhutan border in the Kalimpong subdivision of Darjeeling district in West Bengal. Bird lovers can enjoy a varied collection of hill Birds includes Kingfisher, Brown Dipper, Redstart, Laughing Thrush as well as migratory waterfowl here.

Samsing is wonderful mountain village located at an altitude of 3,000ft. It’s an ideal place for nature lovers and located at the eastern end of Neora Valley National Park.

5kms from Samsing is another small village Suntalekhola also known for its pristine natural beauty with tea gardens, forests and orange orchards. There is a hanging (suspension) bridge here over Murti river which is a popular attraction for tourists.

Gorumara national park is an important national park of north bengal. It is situated just at the foot hills of eastern himalaya in terai region, on the floodplains in murti, raidak. Jaldhaka a tributary of brahmaputra flows just beside the national park. Gorumara has mixed vegetation of forest and grassland. It is famous for its good population of one horned indian rhino.
How to go- malbazar is the nearest railway station.
Best time to visit-oct to june

The Jaldapara Sanctuary covers 216 sq km, is a mosaic of woods, grasslands, perennial streams, sandy river banks and extensive belts of tall grass. It contains a great diversity of flora and fauna of mixed deciduous forest, grasslands and river banks.
How to Go- Madarihat is the nearest railway station. Dooars Tourism
Best time to Visit-Oct to June

Chilapata Forest is a dense forest close to Jaldapara Wildlife Sanctuary in Dooars, West Bengal. It is nearly 22 km from Alipurduar and just a few minutes away from Hasimara town. This forest is used by the Elephants as a corridor to migrate between Jaldapara and the Buxa Tiger Reserve and ultimately to Bhutan.

How to Go- Hasimara is the nearest rail station about 10 kms away from Chilapata. Alipurduar is a major rail junction (20 kms).
Best time to Visit-15th Oct to 15th June

Sikiajhora is a rivulet which meanders through the Buxa Tiger Reserve and enters the plains of Dooars at Panialguri to meet another flamboyant river Bala, which too originates from the Jayanti Hills and Buxa Forest. Rich in biodiversity, Sikiajhora is home to a healthy population of birds and butterflies.

How to Go- The Nearest rail Station to Sikiajhora is Alipurduar Junction. New Jalpaiguri is approximately 150 kms from Buxa Fort. Bagdogra airport is around 160 kms away

Raimatang is a small forest village inside the Buxa Tiger Reserve surrounded by towering lush hills of Bhutan. Its beauty lies in its mix of forests, hills, rivers and tea gardens. Moreover, it is on the western side of Sinchula hills that adds to its solitude..
It is located 45 km away from Alipurduar. Kalchini is the nearest town. you have to cross the Raimatang river to reach our property.

How to Go- The Nearest rail Station is Alipurduar Junction.

Best time to Visit-Oct to June

The Buxa Fort is one of the prime attractions of Buxa Tiger Reserve. Buxa Fort is located at an altitude of 867 meters in the Buxa Tiger Reserve, Alipurduar. Buxa fort is about 30 km from Alipurduar town and about 18 km from Rajabhatkhawa. From Rajabhatkhawa, you have to enter the forest and drive for about 14 km to reach Suntalabari. From here a trek of about 4 km will take you to the fort.

How to Go- The Nearest rail Station to Buxa Fort is Alipurduar Junction. New Jalpaiguri is approximately 150 kms from Buxa Fort. Bagdogra airport is around 160 kms away
Best time to Visit-15th Oct to 15th June

How to Go- Malbazar is the nearest railway station.
Best time to Visit-Oct to June