Welcome to Hornbill Festival 2019,Hornbill festival is an annual event held in Kisama Heritage Village in Nagaland, a tribal state in India. It usually runs from the 1st – 10th December of every year and celebrates the culture and heritage of Naga tribes.It is also called the ‘Festival of Festivals‘. India’s Far North Eastern state. Locals celebrate the fiesta with much enthusiasm and zeal. The festival is named after Hornbill, one of the most venerated bird species in the state.

It’s predominantly a festival to promote tourism to Nagaland and has done an amazing job. Hornbill is now a major event which should be on any traveller’s calendar when they find themselves in North East India.

During the festival you can get up close and personal with 17 major tribes of Nagaland. These are;

Watch their showcases of singing, dancing, sport and even tug of war! Sample local Naga cuisine, drink rice beer, play with traditional instruments, get cosy by the campfire of the Morungs and rock out with the locals once the sun goes down. 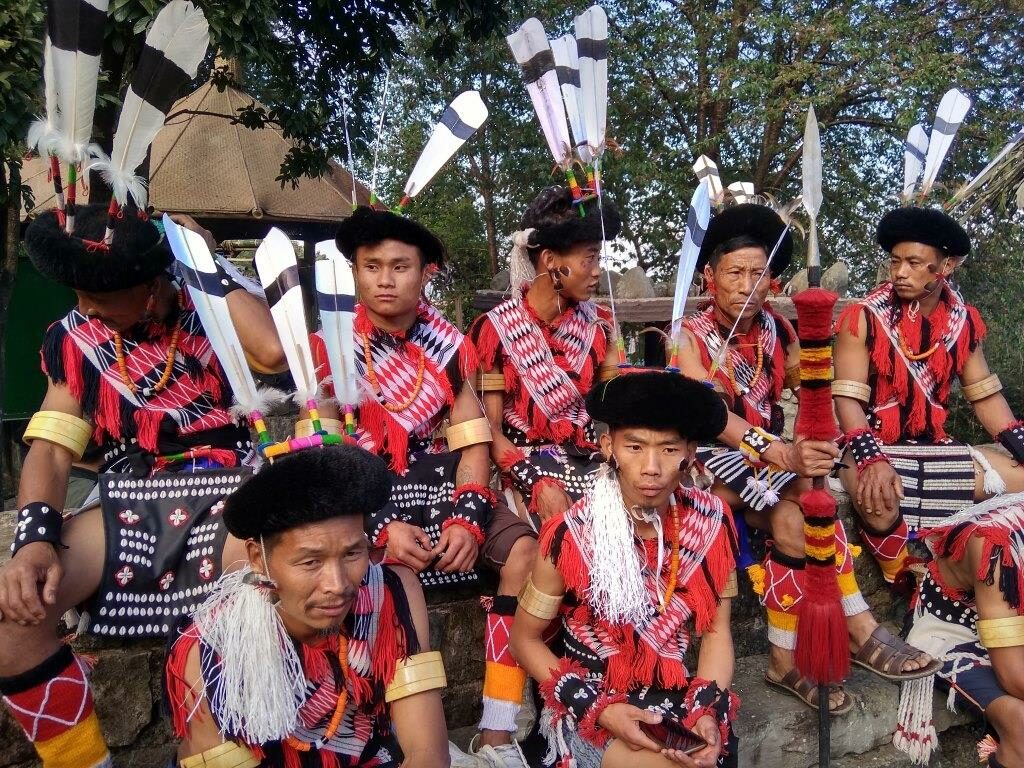 When is the Hornbill Festival Nagaland in 2019?

Hornbill Festival is celebrated annually during the first week of December, i.e. from 1st-10th. However, during the year 2013, it was extended for a few more days. It now normally concludes on December 10.

Where is the Hornbill festival held?

The festival is held at the Naga Heritage Village in Kisama, located around 12 kilometers from the capital of the Nagaland, Kohima. It begins at 9 am every day. You can reach the venue by booking a taxi. Purchase the tickets at the entry gate and pass through the security check. However, make sure you have a valid pass to park the vehicle at the site.

How is the Hornbill festival Nagaland celebrated?

Hornbill festival, also known locally as the ‘Festival of Festivals’, is organized by State Tourism and Arts and Culture Department, Government of Nagaland. The fiesta is celebrated to encourage inter-tribal harmony and promote colorful local culture and traditions. The visual retreat further displays the unique customs, rituals and practices as well as preserve the heritage. Tourists are warmly welcomed and are treated well. The celebrations are attended by all the major tribes of Nagaland who present themselves with various arts, folk songs, dances and games. There are numerous displays of handicrafts, handloom, multi-cuisines, local food stalls. While a rich amount of rice beer is always at hand to indulge in.

Evenings are lighted by the thrilling Hornbill National Rock Concert in which bands from all over the country and abroad participate to compete. This is followed by the amazing Night Market in the town. But the most attractive event at the festival is Naga chilly eating competition. Additionally, the pork eating festival which draws a lot of crowd evokes much fanfare and excitement. 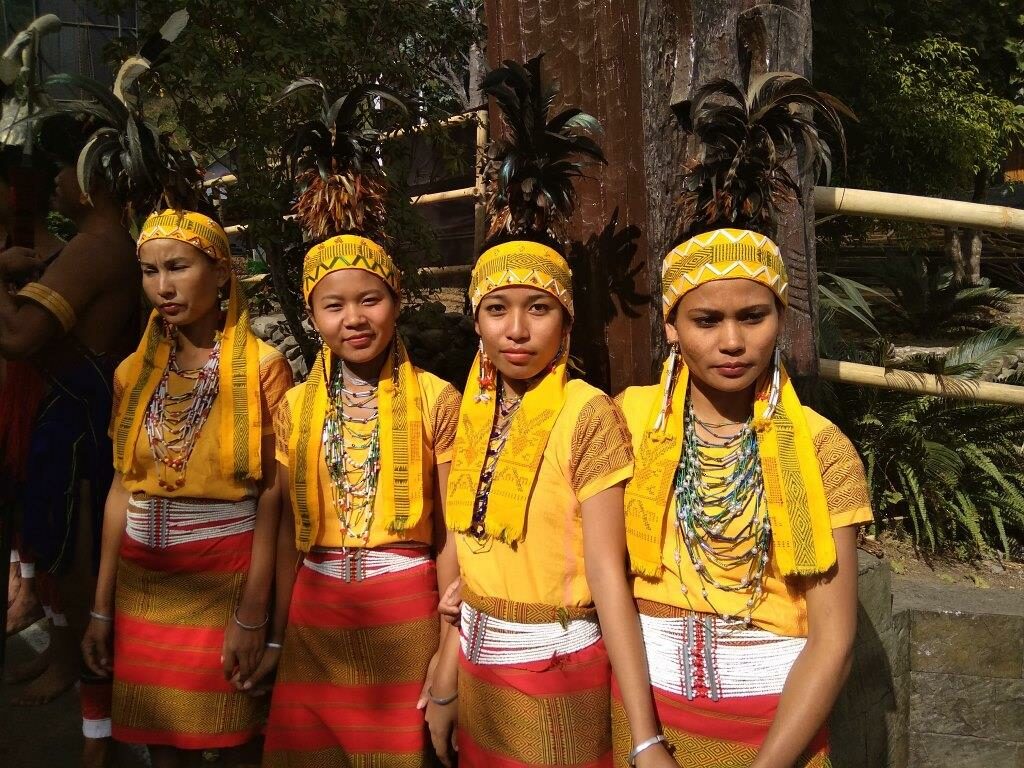 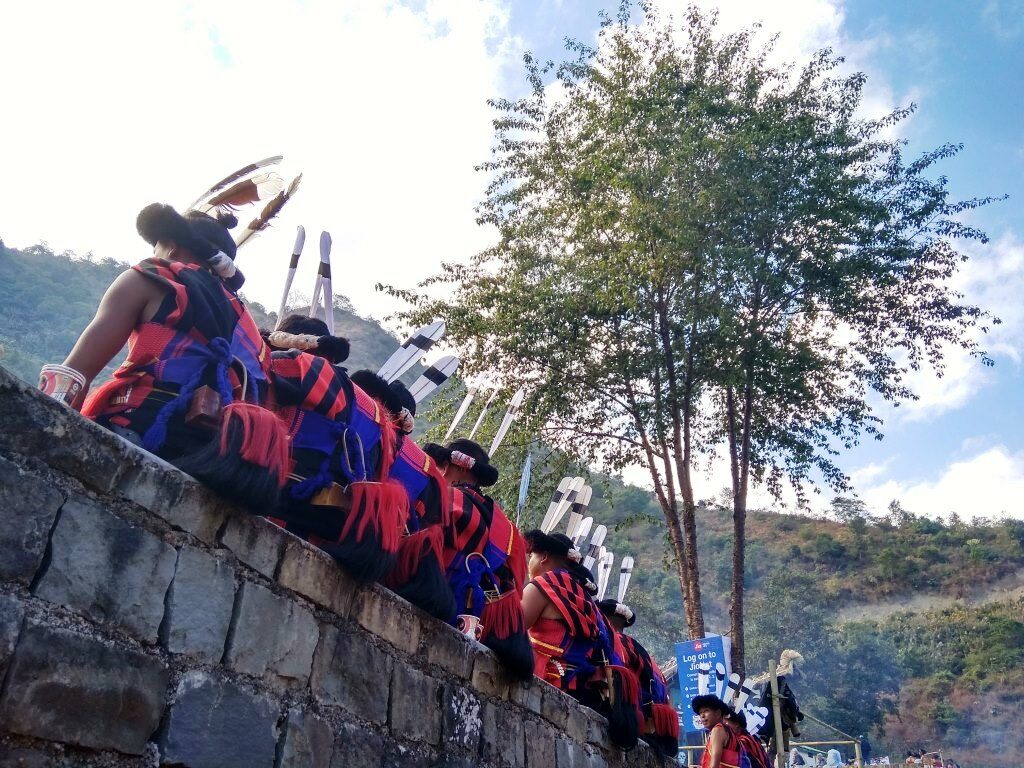 How to reach Kohima, Nagaland

NH39 which is an interlink connecting Kohima to Meghalaya, Arunachal Pradesh, Tripura, Mizoram and Manipur. The state highways co-joins from Guwahati to Shillong where other states are accessed. Personal cabs and buses are available to reach Kohima.

Kohima does not have a Railway Station of its own because of its tough hilly terrain. The closest rail link is in Dimapur, which is connected to the important towns of Guwahati and Kolkata. Although traveling by train can be a slow affair, it nevertheless is the best way to reach Kohima. Not only it is the cheapest but it leads through some of the most scenic views of the amazing mountain valleys and hills.

Again Kohima does not have an airport of its own and the nearest airport is in Dimapur, at a distance of 74 kilometers. Dimapur operates only domestic flights and is connected to Kolkata and Guwahati from where there are direct flights. International travelers will first have to get off at either Kolkata or Delhi international airports and then catch a connecting flight to Dimapur. From Dimapur, it’s a two-hour cab ride to Kohima for which many taxi operators run to and fro which can be hired. However, the option of a 30-minute helicopter ride from the airport is also available in case you are in a hurry. 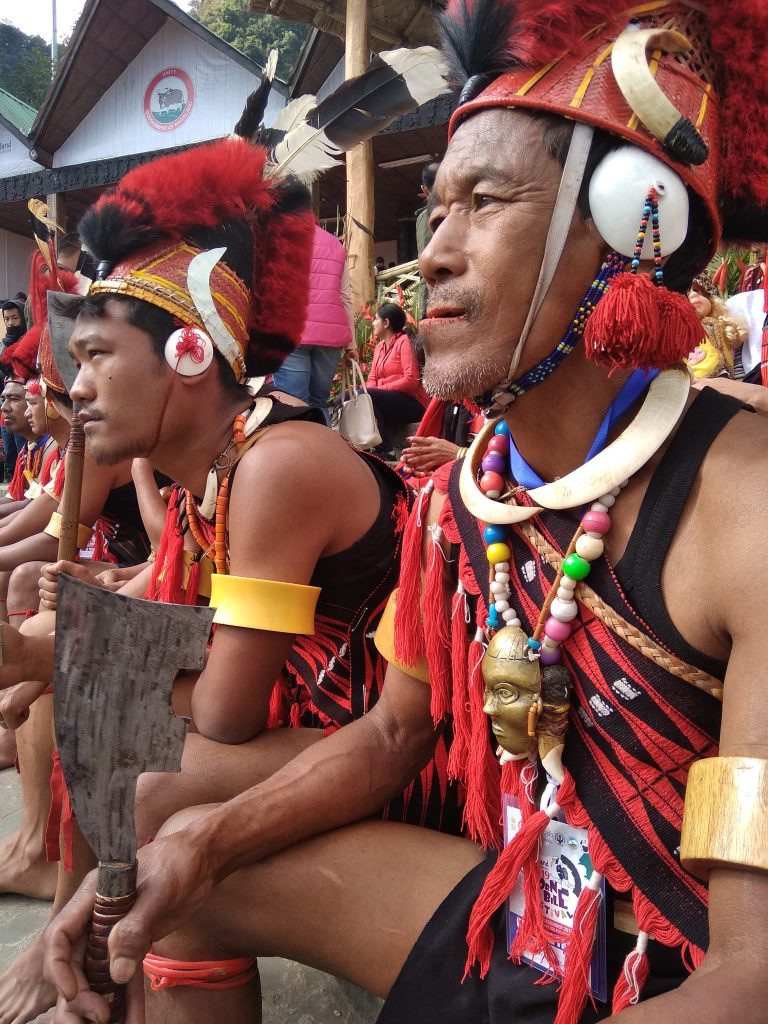 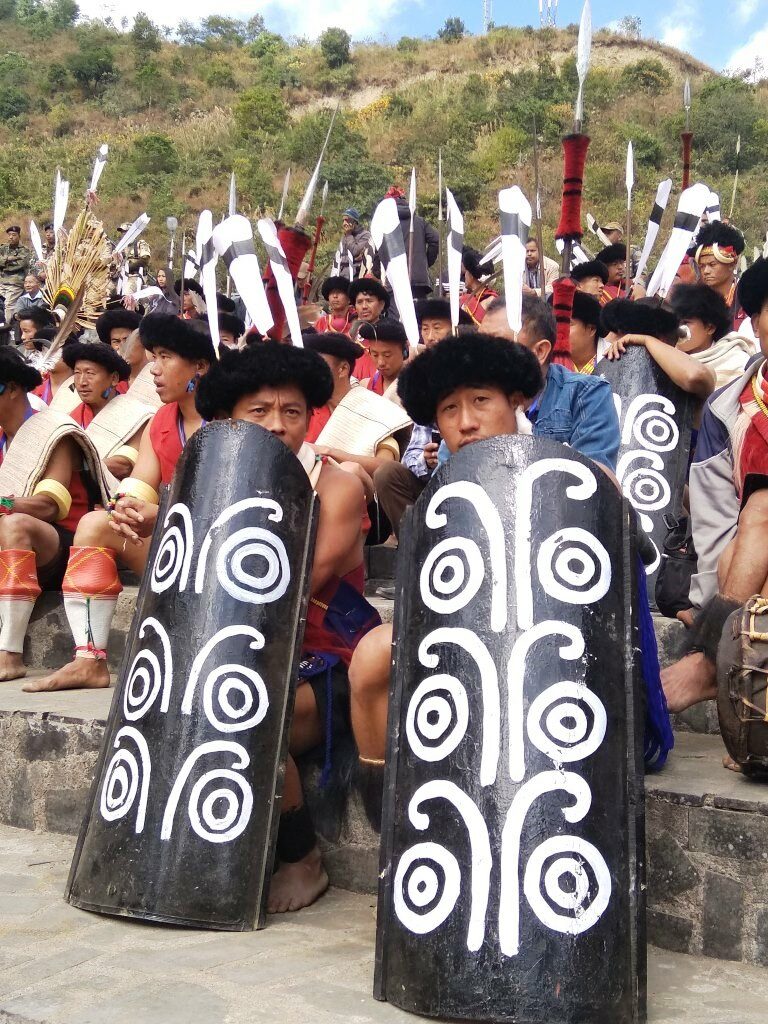 The dates for the Hornbill festival in 2019 will be Sunday 1st December to Tuesday 10th of December.

If you’re staying near the grounds then the price is FREE!  If you’re visiting from outside, say if you’re hotel is actually in Kohima itself, then you pay 20 rupees per day on the gate. DLSR charge is 30 rupees and Video charges will be 50 rupees. Incredibly cheap for such an awesome event.

What is there to do at the festival

You’ll need at least a few days here to enjoy all this festival has to offer you! Although the running order of events each day is the same; the shows, music and tribes will change daily.

Partake in the Hornbill Festival in Kohima while soaking in the comforts of some of the best hotels. There are multiple luxurious hotels like Hotel Japfu, Hotel Vivor, Hotel Kohima and Razhu Pru.

There are so many temporary Campsite near Kisama Village(Venue) like Kite Manza,Camp David & Luxury Camp Called TUTC is also good.

Before embarking on a journey to Nagaland, acquiring the entry permit is a must.

Foreign tourists no longer require a Restricted Area Permit (RAP) / Protected Area Permit (PAP) to enter Nagaland. Previously, tourists were required to travel in a minimum group of four people. They were allowed to visit all 11 district headquarters and specified places with this permit, valid for 10 days, with an option to extend for up to a month. The new rules only require foreigners to register themselves at the local Foreigners Registration Officer (FRO) of the district they visit within 24 hours of their arrival.

Note: RAP/PAP is still a requirement for Pakistan and Chinese nationals. 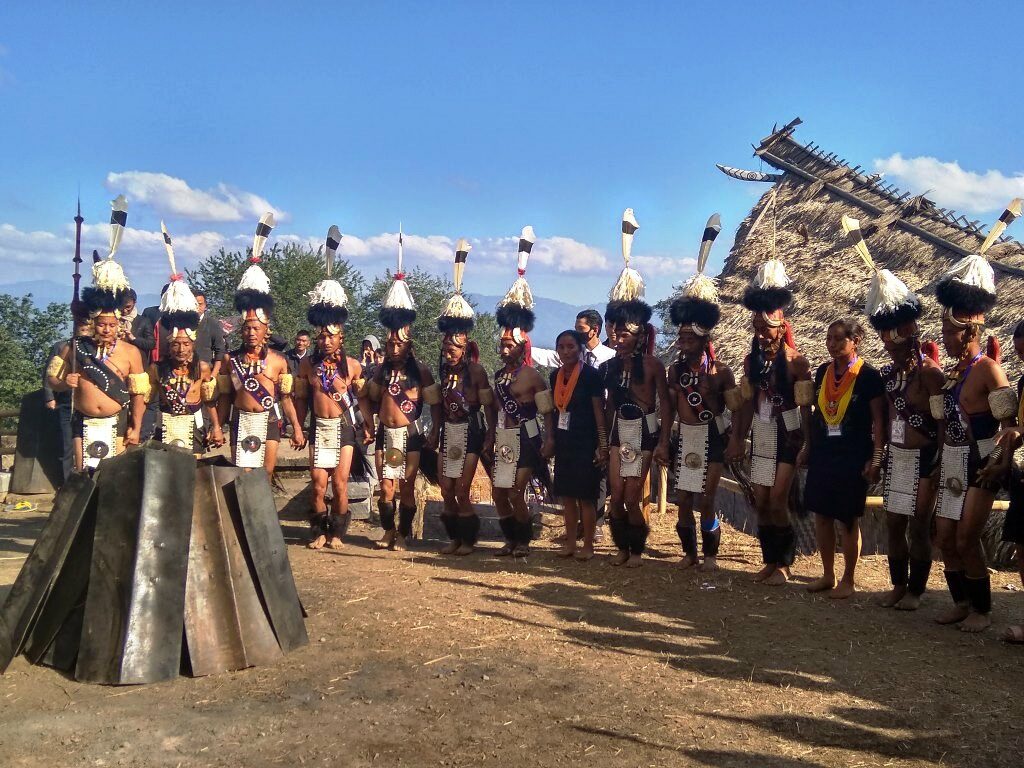 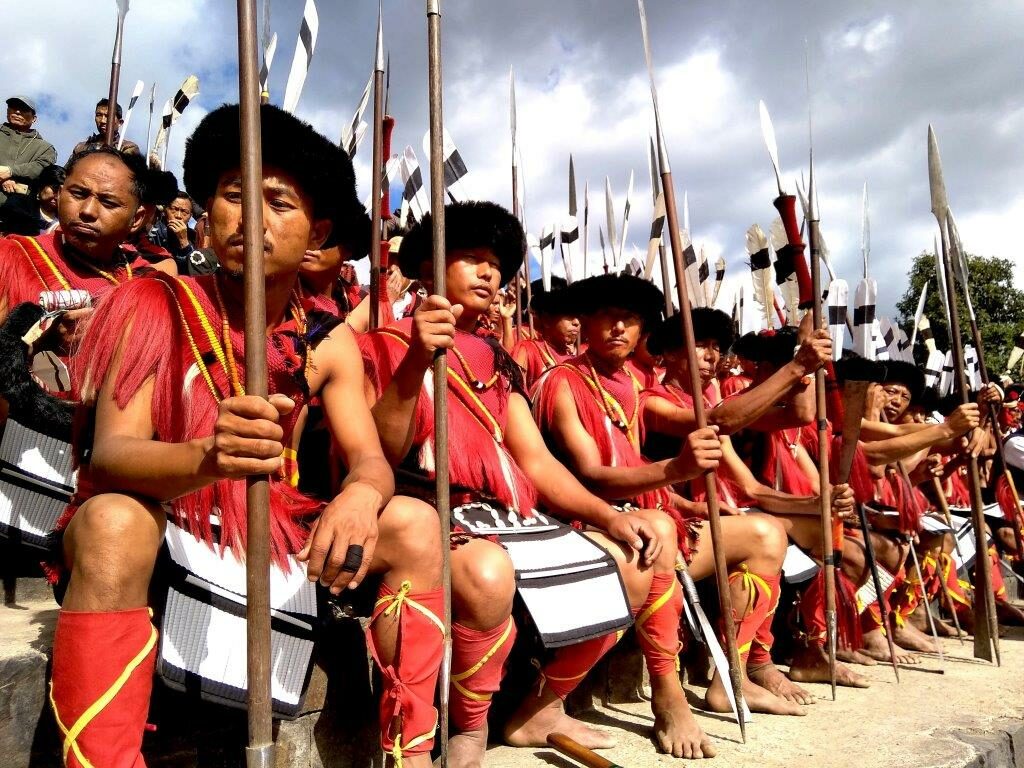 Weather
Hornbill festival takes place during the winter season in Nagaland. Winter chill sets in at Kohima, the capital town, during the festival. Dimapur has pleasant weather.

What to pack
Nagaland is generally a casual state by western standards although people do like to dress in their Sunday best whenever the opportunity arises therefore simple and casual clothes are appropriate for almost any occasion. If you are not participating in any trekking tours sandals and lightweight shoes are sufficient. If trekking is included in your itinerary you will need trekking boots.

Food/Cuisine
Rice, momo and noodle dishes are the staple of Naga food. Fish, chicken, and pork dishes along with cooked vegetables and rice form a typical meal. Chinese and Indian food are available at many restaurants.

Drinks
Drinking tap water or ice is not recommended. Bottled water is readily available but remember to check the seal for possible tampering. You should be drinking a minimum of 1.5 liters of water per day. This should increase as the temperature increases or you are engaging in physical activities. Alcohol, even though Nagaland is a dry state, is available at select restaurants. Naga’s make a special traditional drink called rice beer which should be tried by every tourist.

Arrival in Nagaland
Visitors usually arrive at Dimapur, which is Nagaland’s commercial hub. Dimapur is well connected by Air and Railways. They city has numerous hotels, restaurants, lounges and places to hang out. Kohima is about 3 hours from Dimapur.

Language
English is the official language of Nagaland. Hindi is also widely spoken. Nagamese is the most widely spoken market language.

Internet
Internet and e-mail services are readily available in most major places throughout the state. Some hotels will have this service available and there are many Internet cafes in the major areas.

Trading hours
Government offices and banks are open Monday to Saturday. The banks close at 3:30 p.m. from Mon to Fri. On Sat, banks close at 1:00 PM. Most shops will be open until around 7 p.m in Dimapur. In Kohima, shops close at about 4:00 PM. Restaurants and lounges in Dimapur open till late night.

Shopping
Souvenirs to look out for in Nagaland include woodcarvings, hill tribe fabrics and handicrafts, embroidery, Naga shawls and paintings. Dimapur and Kohima have the best choice when it comes to shopping but Dimapur is a very good place to hunt for bargains. Check out Hongkong market in Dimapur for some nice discounted shopping.

Tipping
Tipping for good service is not expected but is always appreciated. It is customary, though not compulsory, to tip tour guides and drivers at the end of a tour. Hotel and station porters should also be tipped if they are kind and have done a good job.

Etiquette
Naga people are very gracious, polite and generous and will make every effort to have guests feel comfortable. Do not be surprised to be invited home to meet someone’s family you have just met, these are the experiences that will enrich your visit to Nagaland. 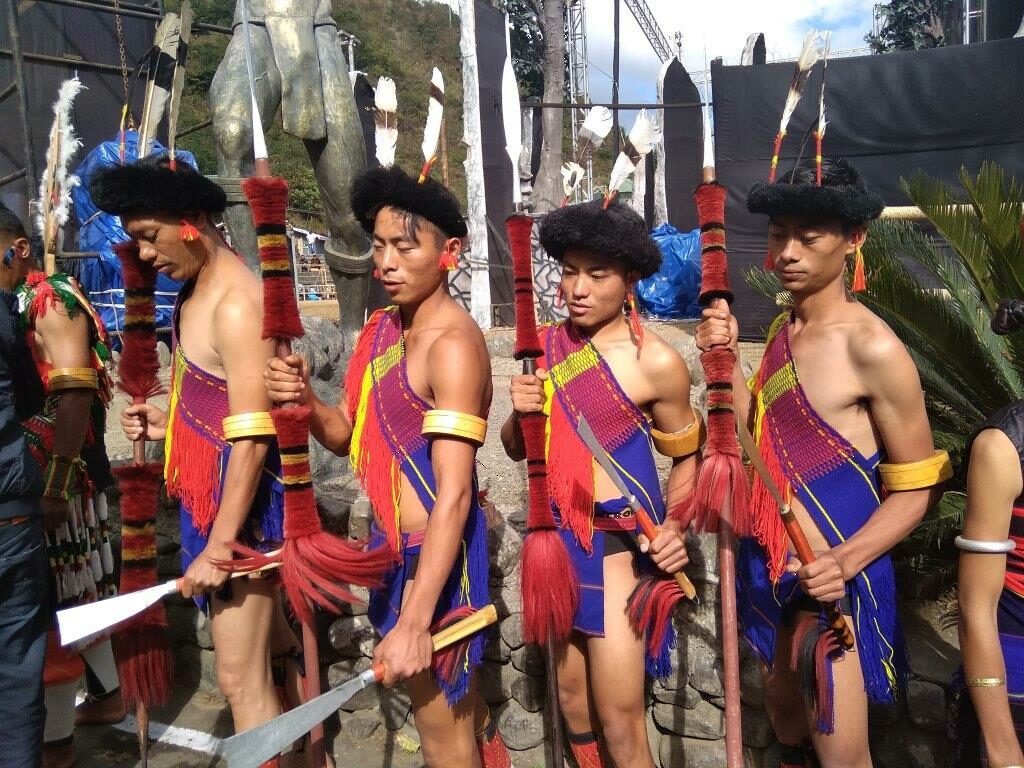 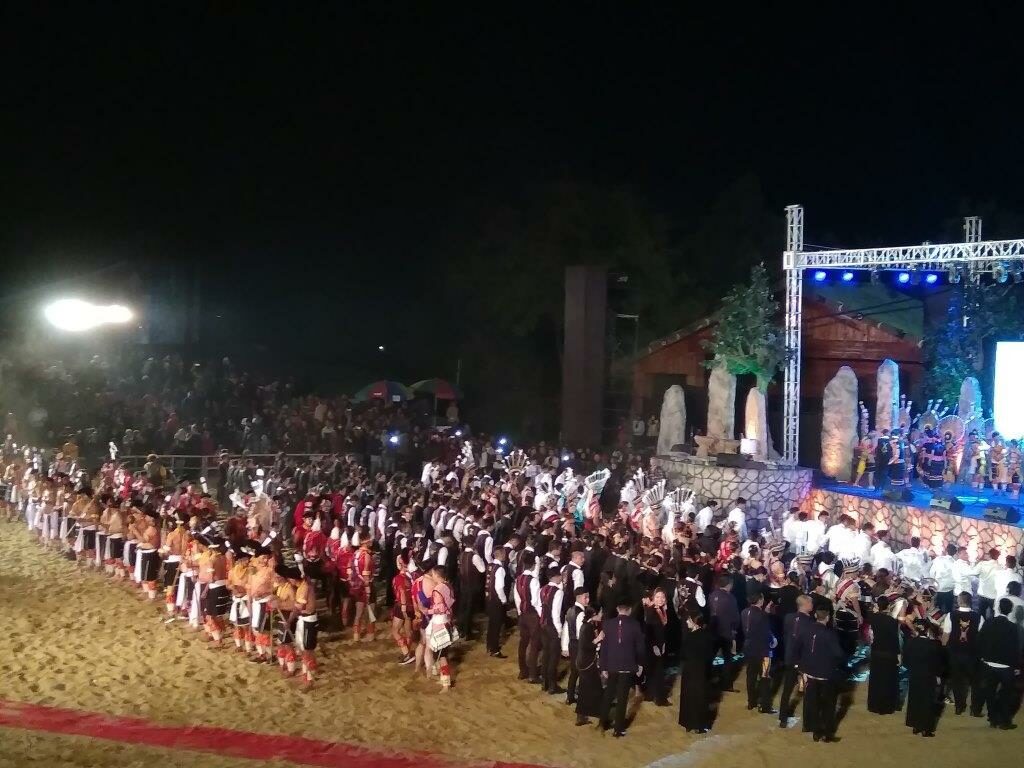 The second highest peak of Nagaland, this 3048m (above sea level) mountain is one of the biggest attraction for many trekking enthusiasts. This peak has been used for trekking for a long time and hence there are many fixed paths depending on the weather and as per convenience.

Nagaland is truly an amalgamation of various tribes! The Kohima Museum portrays the traditions and culture of the many tribes of the state. The museum holds many unique artifacts related to different tribes of the region.

Located about 40 km from the capital city of Kohima is the Touphema Village. It is a cultural village where you get to know the traditional life of the Nagas in an intimate manner. You get to stay in quaint huts, enjoy bonfire dinners, cultural dances and more.

the zoo houses the state bird, the rare Tragopan bird, and the state animal, the wild buffalo. The zoo is created on a hill and the hill has been beautifully used to provide natural landscapes for the animals.

A town belonging to the ‘Angami Naga’ ethnic group of Nagaland, Khonoma Village is a one-of-its-kind project in the country. Located about 20 km from the state capital of Kohima, Khonoma village is a Green Village, where all forms of hunting have been abolished for a more sustainable ecosystem. It is testament to the will power of the tribal groups of Nagaland to protect and conserve their natural habitat. The resident Naga tribes here are traditionally dependent on nature for their food and have strong hunting practices. However, they have given up on their centuries old heritage for a more sustainable way of life with nature.

A beautiful foot shaped lake in the heart of the Patkai range of Nagaland, Shilloi Lake is a very picturesque destination with verdant valley surrounding it from all sides.

This is, perhaps, one place in Kohima you wouldn’t want to miss at all. This beautiful site is dedicated to the 10,000 Allied soldiers who lost their lives during the Japanese invasion during the World War-II.

The city of Kohima has had a really violent past and now, the city is making up for it. This cathedral too stands out in the city, providing a beacon of hope and peace.

This is the home of the native tribe of Nagaland, the Ao Naga tribe. About 150km from Kohima and at an altitude of nearly 1400m above sea level, Mokokchung is considered to be the ‘capital’ of the Nagas.

Located 35km from Dimapur, this sanctuary is said to be home to a whole variety of Animals such as Elephants, wild buffalos, the rare Hoolok gibbon, sloth bear, barking deer black storks and a lot more! The National Park takes pride in its 200km square natural yet protected habitat.