Here is the bucket list of Top 15 Offbeat Places in Sikkim- One of the Himalaya’s best-kept travel secrets, the tiny state of Sikkim is an epitome of serenity. With its lofty snow clad peaks, emerald slopes and quaint villages dotted with multi-hued prayer flags, this traveller’s paradise has many hidden destinations waiting to be explored.

Sikkim was once a remote mountain kingdom, ruled by Chogyals (Kings) until 1975; Sikkim is today opening up and proving to be an enchanting new world of friendly, socialite people, exotic flora and fauna, fabulous vistas and serene monastic settlements. Sikkim Tourism India offers several treks that lead through pine forests and picturesque valleys.Explore offbeat places in Sikkim with The Weekender.

Hot steamed flour dumplings filled with minced meat, cheese or vegetable, accompanied by home made chilli sauce and piping hot soup. Yes, we are talking about the Momo, the most commonly available food in Sikkim. From roadside shacks to the most expensive restaurants, you will find Momos on every menu. Another popular and easily available item is the Thukpa or Gya-thuk, a typical Tibetan style noodles in soup, based with vegetables or meat.

The People of Sikkim consist of three ethnic groups, that is, Lepcha, Bhutia and Nepali. Communities of different hues intermingle freely in Sikkim to constitute a homogeneous blend. Hindu Temples coexist with Buddhist Monasteries, Churches, Mosque and Gurudwara.

As suggested by Sikkim Tourism, the best time to visit Sikkim is either between March and May or October and mid-December. If you want to witness the blooming natural beauty in Gangtok best season to visit would be in spring, from March to May. Autumn, on the other hand, brings the clear view of Himalayan Range.

How to Reach Sikkim-

New Jalpaiguri and Siliguri are the two rail stations nearest to Sikkim located in West Bengal. NJP is 125 Kms and Siliguri is 114 Kms from Gangtok and is well connected to all the major cities. Ticket reservation facilities are available from Sikkim Nationalized Transport office in all working days.

Sikkim, due to its adjacency to the borders of neighboring countries like China, Bhutan and Nepal, the whole of Sikkim is under restricted area regime. And therefore foreign tourists are required to get first Restricted Area Permit (RAP) earlier known as Inner Line Permit (ILP) issued by Sikkim Tourism Officers in order to explore any part of Sikkim including the capital city Gangtok. The entry permit is issued by the Ministry of Home Affairs, Government of India only on the strong basis of valid Indian Visa. However, Indian tourists do not require such kind of permit or permission. 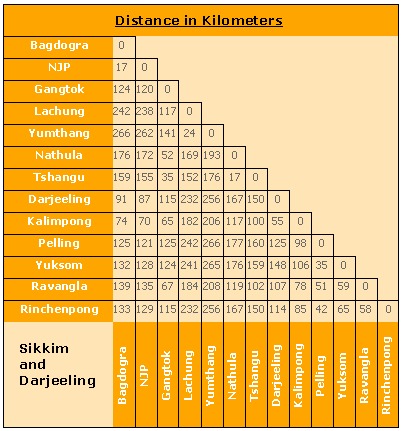 Borong, nestled on the foothills of Maenem Hill is a new-found offbeat destination in South Sikkim. It is a quaint village near Ravangla in South Sikkim.It is located at an altitude of 5800 feet in South Sikkim is the perfect destination for nature lovers. Borong can be easily accessed from Siliguri or New Jalpaiguri. Some 17 km from Ravangla

Around 20 kms from Rongli in East Sikkim is this new-found heaven for birdwatchers and solace seekers. This is a new addition destination of Old silk route or Zuluk trip itinerary. It is around 132 kms from Siliguri

Yuksom is a historical town in Geyzing subdivision of West Sikkim. Blessed with jaw-dropping gorgeousness, this place is a must see. Popularly known as the Gateway to Mt. Kangchendzongha, Yuksom features entrancing trails worth treading.

The Old Silk Route or Silk Road which passes through East Sikkim is a part of the ancient network of trade routes which connected China to India. This route passed through Lhasa and Nathu La and Jelep La Pass and finally reached the port of Tamralipta (present Tamluk in West Bengal) from where it took to the sea and reached far east.

One of the most unexplored destinations of Sikkim with astounding flora and fauna is Sumbuk located at Southern district of Sikkim. Nearby village village of Sadam, which is famous for the geological wonder – Tarey Bhir. It is a ridge 10000 feet long with an abrupt drop of 3500 feet.Most offbeat place in South Sikkim

The Yumthang Valley or Sikkim Valley of Flowers sanctuary, is a nature sanctuary with river, hot springs, yaks and grazing pasture on rolling meadows surrounded by the Himalayan mountains in the North Sikkim.

Hee Patal-Chayatal, a breathtakingly beautiful hill station with panoramic views of Mt. Kanchenjunga, Pandim, Kabru and Narsing, which rise up from virgin forests of Oak, Walnut and Pine.

Pelling today has emerged as one of the important tourist destinations. It is situated at altitude 6800 (Naku Pelling 5200) and offers a breath-taking view of the Khangchendzonga

Sribadam is a beautiful forest village located at an altitude of 1,821m above sea level. The village lies in West Sikkim which falls within Rinchenpong constituency.Offbeat places in Sikkim

Yakten, which is a new entry in Sikkim’s Eco and community based tourism. Located in the eastern part of Sikkim near Pakyong airport, Yakten has its own natural charm and cultural signifying.

Sajong Farmhouse is aprox. 18 km away from Gangtok, Sikkim’s capital at Sajong, Rumtek. It is carefully chosen and planned to provide our valued patrons, a perfect getaway holiday