Cossimbazar Raj Palace or Rajbari, where history tells everything,MURSHIDABAD- The last capital city of independent Bengal before British rule was named after Nawab Murshid Quli Khan, the Dewan of Bengal, Bihar and Orissa. Situated on the banks of the Bhagirathi, it is a city of splendours and is famous for its silk.

In about the year 1700 Ajodhya Ram Roy of Pirojpur village near Bhagabangola and the river Padma (who traced his descent from Patrasayer of Burdwan District) came with his family to settle down in Cossimbazar . It being located near Murshidabad, the capital of Bengal Bihar and Orissa and the Seat of the Nawab, Cossimbazar was well protected and a port city providing excellent opportunities for business and livelihood .

Ajodhya Ram Roy and his son Dinobandhu Roy were engaged in the business of silk exports and from this flourished the fortunes of the family. The annual performance of Durga Puja that was done at Pirojpur was continued at the Cossimbazar house. 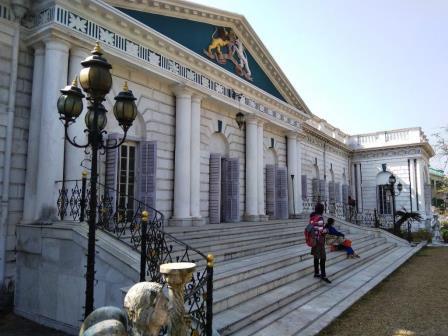 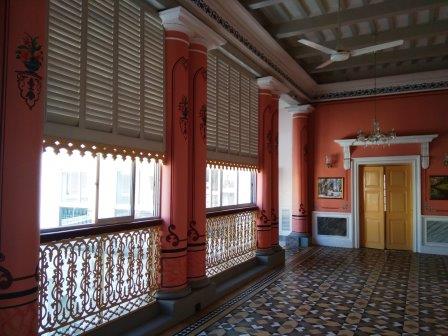 In recognition of the family’s benevolence towards the local people, the British government conferred the title of ‘Rai Bahadur’ to Annada Prosad Roy. They also wanted to confer upon him the title of ‘Raja’ but unfortunately Annada Prosad died on the eve of the ceremony. Later the title was conferred upon his son Ashutosh Nath Roy. Meanwhile, the palace was also rebuilt in parts or expanded through new buildings, temples, offices, gardens, tennis courts, etc. over time.

The Roy family has converted a few rooms of the palace into guest rooms where you can enjoy the old world charm and traditional hospitality. It can also be a base to explore the historic city of Murshidabad.

The English, Dutch and French East India companies all maintained factories at Cossimbazar. So the town has lots to see. Come here during the winters or Durga Puja when the family palace holds the annual rituals at the renovated ‘chandi mandap’ — a hall with an open courtyard in marble.

The palace with a thousand doors, is the chief tourist attraction of Murshidabad. Built in 1837 by Duncan McLeod for the Nawab Najim Humaun Jah, a descendant of Mir Zafar, it has a thousand doors (only 900 are real) and 114 rooms and 8 galleries. It is now a museum and has an exquisite collection of armour, splendid paintings, exhaustive portraits of the Nawabs, beautiful works of ivory from China and many other valuable works of art

The miniature of the Hazarduari, the Nasipur Royal Palace is situated a little to the north of Akhra, very close to Jagat Seth's house. It was built in the 2nd half of the 19th century by Raja Kirtichand Bahadur who came from Panipath to do business and later who became famous during the devastating famine of 76 as a revenue collector of the British company. 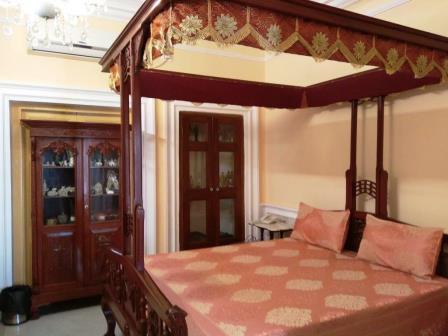 It is stands parallel to the north face of the Hazarduari Palace. Built in 1847 AD by Nawab Nazim Mansoor Ali Khan Feradun Jah, it is the largest Imambara in Bengal and is perhaps the largest in India.

The great gun called the Jahan Kosha "destroyer of the world", which originally rested on a carriage with wheels, The cannon is made of a composition of eight metals, namely gold, silver, copper, lead, zinc, mercury, iron and tin. It is 17 ft and 6 inches long, with a girth of 5 ft at the touch hole end. The cannon weighs about 7,900 kgs and 17 kgs gunpowder was required for a single shelling.

Khosh Bagh lies on the opposite banks of Bhagirathi. The grave of Nawab Alivardi Khan, Alivardi's Mother, Siraj-ud-Doula and his wife Lutfannesha and other members of the Nawab family lived here. The Khosh Bagh cemetery is built over 7.65 acres of land.

Katra Masjid is situated about a mile in the north eastern side of Murshidabad town and is only 3 Kms from Murshidabad Railway Station. It was built by Nawab Murshid Quli Khan in 1137 A.H., Four huge minars were built at four corners of this quadrangle of which one in the North West and the other in the south west are now surviving. Below the steps of the Mosque Murshid Quli Khan's mortal remains lie buried from 1727 AD.

Opposite the Deuri, 1.5 km north of Hazarduari is the Zafraganj Cemetery. There are more than 1000 burial sites of Mirzafar and his family here. Along the gate, third from the eastern end lied Mirzafar. Mirzafar's wives Mani Begum and Baboo Begum were also laid to rest in this graveyard. 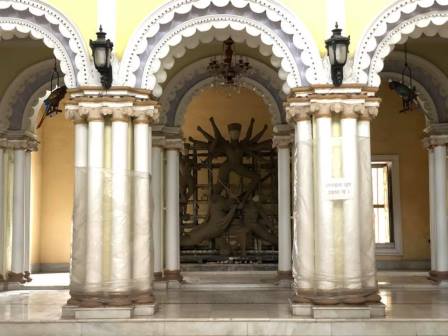 How to reach Cossimbazar-

Now they are running 7 heritage rooms with inhouse Restaurant

Note-GST is applicable on room tariff.

There is no Packages for this place.